How Chinese sellers trick you with pictures, ratings and reviews

Chinese sellers often take various shortcuts to place new products on the German market. With the help of some examples, we will show you exactly how the sellers proceed.

Reviews play an important role when it comes to the sale of products. As a rule, the more reviews, the higher the number of sales. Chinese sellers, in particular, are happy to help in this regard to give a product more credibility.

A look at the new releases (opens new window) of Amazon is often enough to find products that sellers have assisted with reviews. New products usually have only a few reviews; therefore, products with many reviews are easily spotted. 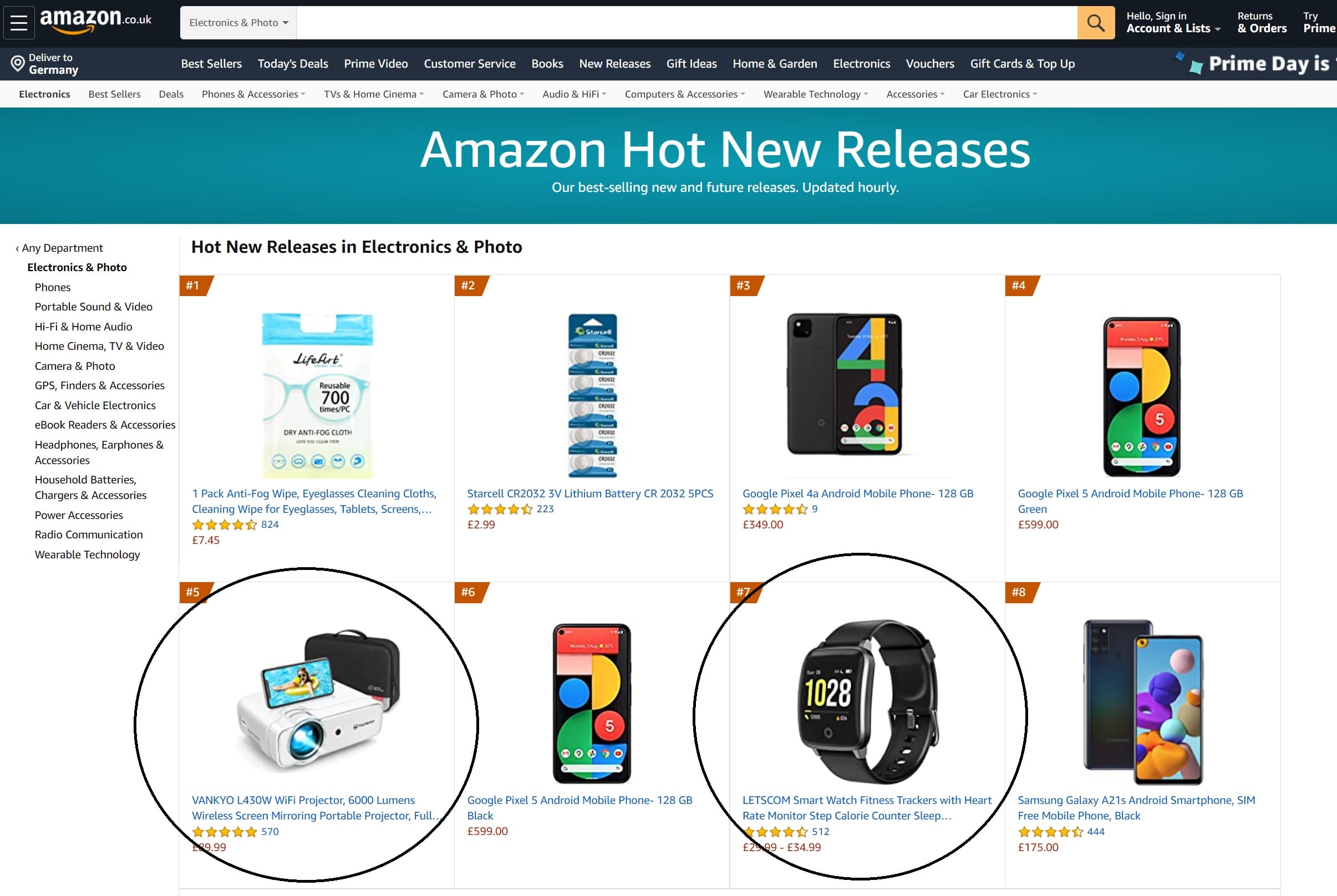 The shown competitors on positions 5 and 7 immediately catch your eye. Almost 600-star ratings for a new product? Kudos! Let's take a closer look at the product in 5th place.

Figure 2: Amazon product with many reviews

According to the product detail page, this product has been available since September 20. Two weeks later, this product already has 570 reviews? Hardly. When you look at the ratio of reviews with text to the ratio of ratings overall, you can see that.

If you look at the course of the reviews, you can see that the first reviews are all unverified, consistently positive, and the customer gave all in a short time. 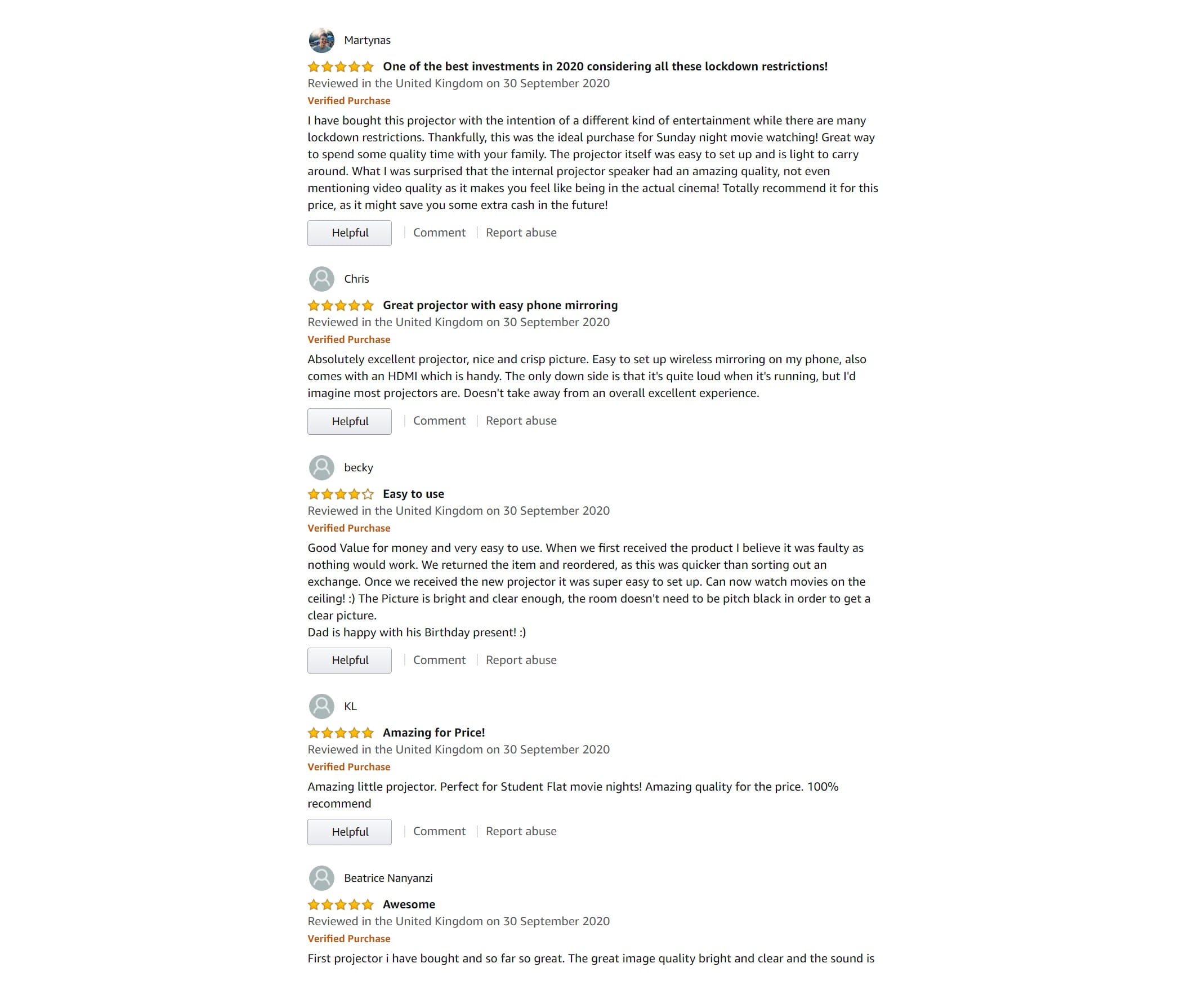 Looking at the profiles of the people who praise the product, you will find the Profile of Chris, who has written almost 100 reviews in the last six months. All with five stars. Chris is probably lucky since every "purchase" seems to be a hit. And Chris is diligent. Every 2-3 days, he publishes a review. Chris must have much money.

Or did Chris not buy the products at all? Does Chris get the products as a gift or even money for his reviews? We don't know, but it looks strange, and these black-hat tactics are not unusual. A quick look at a few Facebook groups is enough, and you will be overwhelmed with such offers.

To provide many reviews quickly, sellers often create many variants in a short time to provide the first star or unverified ratings for each variant. Finally, the variants also share the ratings.

In most cases, there are only a few differences. And a "product tester" could give not just one but also ten reviews—some prankster with evil thoughts on his mind.

Use of false images

It is precisely the use of Apple's Airpods as an image that makes potential buyers want to buy. This kind of Apple product for only 25 EUR? This makes the heart of every bargain hunter beat faster. The disappointment kicks in when unpacking.

The same thing happened with the iPhone cable in the following picture. Numerous customers complain that the cable does not fit at all. 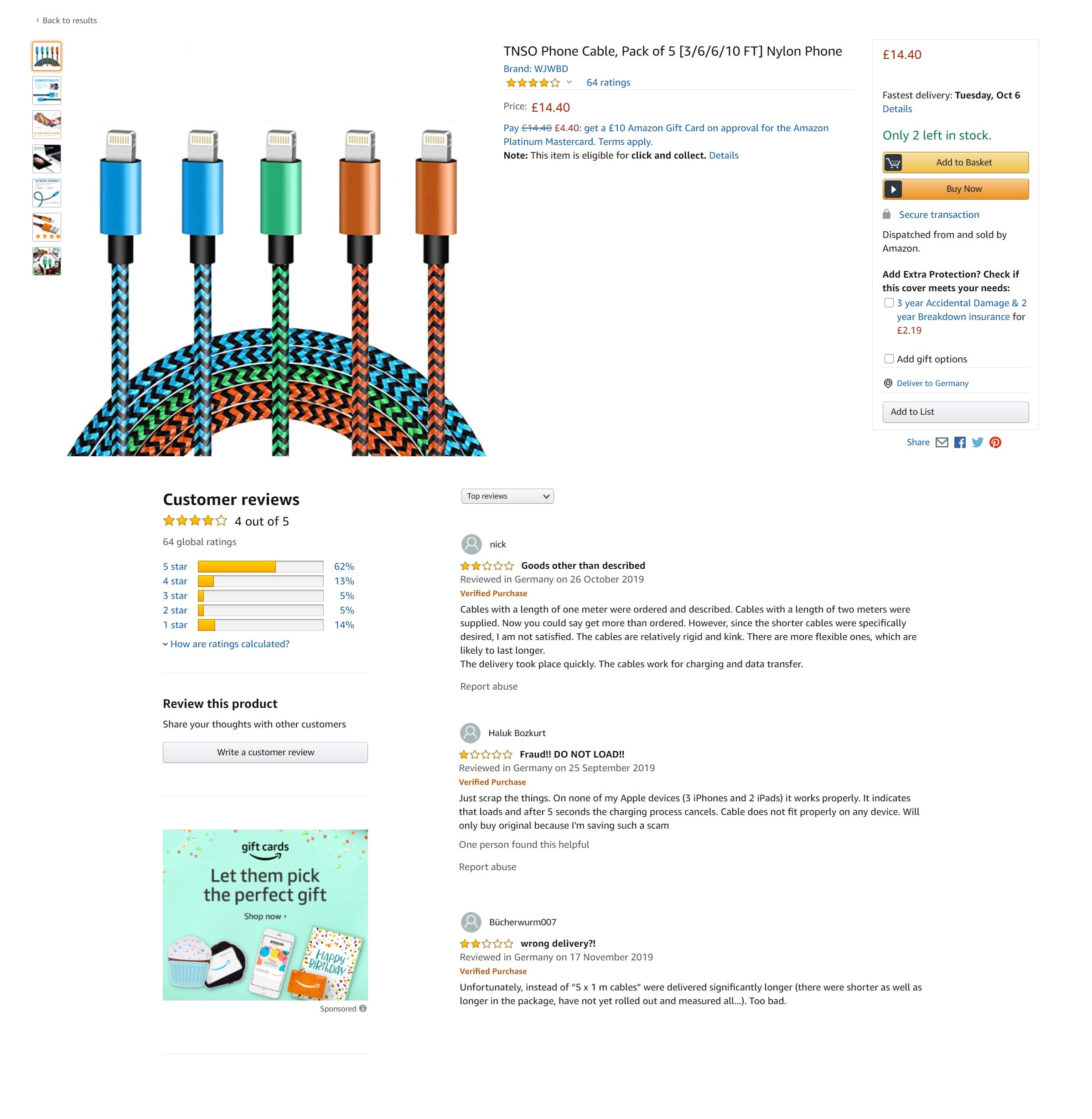 Use of old ASINs

Chinese sellers also like to attach themselves to old, discarded ASINs, e.g., a further variant of a product family that is no longer used. The practical thing: The reviews are inherited directly. This can often be seen in the reviews that refer to completely different products. But you have to look closely to see this. At first glance, everything looks ok, especially when the first reviews of the new product are received.

Sometimes Chinese sellers place huge fake orders to block a seller's stock temporarily. The sellers then place an offer themselves, and in this way, they reach the buybox.

In the example above, an FBM item costing around 20 EUR was placed in the shopping cart many hundreds of times, and the order was then canceled. A short time later, various Chinese sellers were found on this listing.

Another criminal method is to generate artificially negative ratings for a product. This often works like this: A seller attaches himself to an existing listing with a preferably higher price rating to be "weakened." Now he hires buyers who purchase the product specifically from him so that the revenue from the purchase benefits him and no one else. The product is usually not shipped. However, the buyers are refunded the money behind the scenes and receive the task to leave negative ratings. These can be reviews but also simple star ratings. The latter is even more difficult for the brand owner to question. On the other hand, negative fake reviews can often be recognized as such.

The smaller the number of existing reviews, the fewer negative reviews are needed to lower a rating below 4-stars.

The following table shows how many 1-star ratings are necessary to push a listing from 4.4 to 3.5. Especially for products with less than 100 ratings, comparatively few negative ratings are sufficient.

Reading example: If a listing has 40 ratings with an average of 4.4, only 15 1-star ratings are needed to lower the average to 3.5.

The consequences are obvious: the product is bought less frequently, thus decreasing its visibility, making it even less likely to be purchased, and the downward spiral takes its course. Products can therefore be "shot down" in a targeted manner.

A seller once reported about this case: a several years old negative evaluation of a product suddenly received many "helpful" or "useful" votes "overnight." As a result, this rating suddenly appeared among the top reviews, displayed at the end of the listing and often read first by potential buyers.

The following example shows a review that has been translated into English from another language. It is unlikely to be helpful for most customers, it received nine votes in a short time.

Whether they are fake or not: In AMALYTIX, we monitor the top reviews so that you can quickly see which of your listings may be experiencing difficulties.

There are several other methods. And not all Chinese sellers are cheaters. Some German sellers deliberately violate the guidelines as well. One thing remains to be noted: None of this is sustainable. Amazon usually deletes products that so obviously violate Amazon's policies. However, this can take a while, and a few weeks are often enough for the sellers to make the campaign profitable. Even if the sellers are fully terminated, they usually have additional accounts, and the "game" starts all over again.

Do you know any other tricks? Send us a mail at info@amalytix.com. Confidentiality is, of course guaranteed.

Table of content
Back to top
Would you like to get new articles in your inbox?
Would you like to have a better overview on Amazon?
Monitor your listings 14 days for free!
Test 14 days for free
Features for Sellers
Features for Vendors
Do you have any questions? Don't hesitate to call us or send us an email!
Tel. +49 221-29 19 12 32 | info@amalytix.com